Franciscans of the Divine Mercy > About Us

Franciscans of the Divine Mercy

The Franciscans of the Divine Mercy is a religious missionary community of the Roman Catholic Church founded in 2011 by Rev. Fr. Bonaventure Ma. Valles, FDM. It began as an experience of life based on the Franciscan-Kolbean spirituality integrated to the message of Divine Mercy to St. Faustina Kowalska.

The community is composed of Friars and Sisters. Between the Franciscan Friars of the Divine Mercy and the Franciscan Sisters of the Divine Mercy there is a spiritual link, but no canonical affiliation. Both share the same goals, but the Friars follow the definitive First Order Rule of St. Francis, whereas the Sisters follow a version of the Third Order Rule. As part of the great Franciscan Family, the Friars and Sisters share that spiritual link which unites within the one Franciscan Family all communities tracing their origins directly or indirectly to St. Francis of Assisi and seeking to realize one or another special aspect of the Franciscan charism. 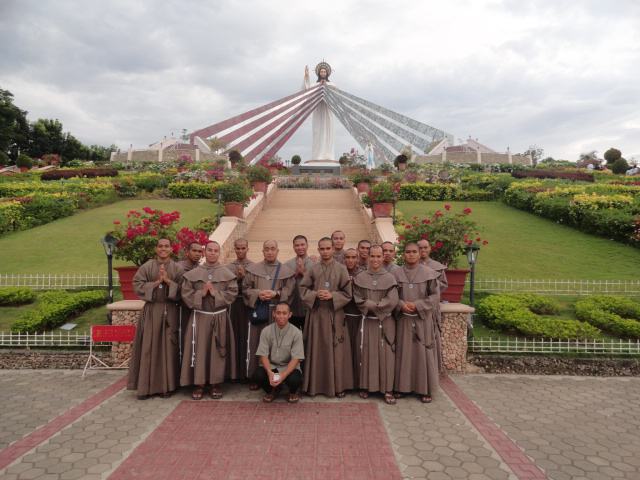 The name of this community directly expresses its “Franciscan” character. Its members are followers of St. Francis of Assisi. They are first of all brothers and sisters before any consideration of rank, either hierarchical or especially academic. And “Divine Mercy” indicates the gift they have received from the mercy of God the Father in calling them to be conformed to Jesus Crucified like St. Francis of Assisi, and how they must seek to share this mercy, corporally as well as spiritually, with the poorest and most marginalized of those for whom Jesus gave His life as a ransom.

Rev. Fr. Bonaventure Ma. Valles, FDM founded our religious community in 2011. His baptismal name was Rizalino Jose Branzuela Valles. He was born on September 23, 1961 in Cebu City, but his permanent family residence is in Poblacion, Plaridel, Misamis Occidental.

Fr. Valles is fondly called “Dodong” by his family members and close friends. His mother is Rizalina Cagampang Branzuela, born on March 29, 1934, and a nurse by profession. His father is Jose Abarca Valles, born on March 19, 1928, and a graduate of medicine, who died on June 14, 2006 at the age of 78. He is the second of three children in the family. Jocelyn Teresa is the eldest, born on September 3, 1960, and a doctor by profession. Ralph John is the youngest, born on October 15, 1963, also an engineer.

Fr. Valles studied basic education at Plaridel Elementary School. He finished secondary education at St. Nicholas High School, administered by the Religious of the Virgin Mary (RVM) Sisters. Both schools were located in his hometown of Plaridel, Misamis Occidental. Then, he graduated college in 1983 with a bachelor’s degree in Mechanical Engineering from Cebu Institute of Technology (CIT). In 1984, he became a licensed Mechanical Engineer after passing the Board Examination for this profession. 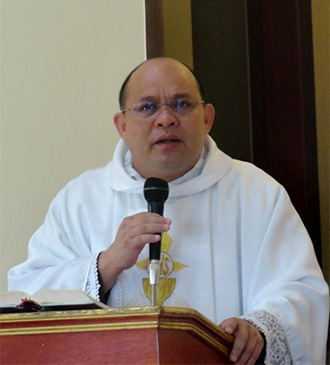 While still a college student in 1982, Fr. Valles was already involved in the Catholic Charismatic Renewal Movement (CCRM), particularly with its Youth Ministry. It was during this time also that he felt the call to serve God in the priestly and religious life. This was the reason why he worked only briefly as a lay person after he became a licensed Mechanical Engineer.

On May 10, 1986, he entered as a young aspirant in the Order of Friars Minor Conventual (OFM Conv.). Later, when some members of that order separated themselves to form a different religious institute, the Franciscan Friars of the Immaculate (FFI), Fr. Valles joined them.

Fr. Valles studied Philosophy at the Rogationist Seminary in Manila, affiliated to Adamson University. His initial theological studies was done in Holy Apostles College and Seminary, in Connecticut, Massachusetts and continued at the Pontifical University of St. Thomas Aquinas (The Angelicum) in Rome, Italy.

Fr. Valles was ordained a priest on October 9, 1993 by His Eminence Ricardo J. Cardinal Vidal, DD at Our Lady of the Sacred Heart Parish in Cebu City. Then, he occupied various administrative positions in the FFI. As Delegate Superior of the FFI Philippine Mission, he was responsible for its vocation promotion, religious formation, building constructions and fundraising activities. He was also intensely involved in the preaching ministry, hearing confessions and giving spiritual directions with individuals, covenanted communities and religious groups within the Philippines.

From 1990 to 2011, Fr. Valles strived to live as a faithful religious of the Institute of the Franciscan Friars of the Immaculate. On December 10, 2002, Fr. Valles went to Brazil as a missionary of the FFI. There he saw the depressed conditions of the poor. Then, he came to reflect of the similar situations of the poor people in the Philippines. What if he would also serve the poor especially among Filipinos? That inspiration continued to grow as he also reflected on the life of St. Padre Pio of Pietrelcina whose date of death on September 23, 1968 had a certain similarity with his own date of birth on September 23, 1961.

This new inspiration of Fr. Valles still has a link with genuine Franciscan works. Because Padre Pio, who belonged to the Capuchin Franciscans, built a hospital for the poor in Italy, the Casa Sollievo della Sofferenza or “Home for the Relief of Suffering” as a refuge of the poor who are sick. Aside from that, Padre Pio also served the spiritually poor who needed conversion and forgiveness through his ministry of the confessional. Worth mentioning also is the fact that St. Francis of Assisi served poor lepers at some point in his religious life.

Fr. Valles’ inspiration was further linked to the charism of St. Faustina Kowalska, which is to spread the message and works of mercy as instructed by Our Lord and written in her Diary.

The moment Fr. Valles received the permission from Fr. Stefano Ma. Manelli, FI to concretize his new inspiration, he prayed for divine light so that he could find someone who could help him. Then, Fr. Peter Damian Mary Fehlner, FI came to his mind. He met Fr. Fehlner at La Crosse, Wisconsin, USA. Based on their conversation, Fr. Fehlner directed him to form a community, to be named “Franciscans of the Divine Mercy,” combining the Franciscan-Marian spirituality of St. Maximilian Mary Kolbe and the Divine Mercy charism of St. Faustina Kowalska.

Since 2011 until present, Fr. Valles is under exclaustration status. The two FFI Founders, Fr. Stefano Ma. Manelli, FI and Fr. Gabriel Ma. Pellettieri, FI granted him permission in 2011 to concretize his inspiration of forming another Franciscan community dedicated to serve the poorest of the poor.

Immaculate Queen and Mother of Mercy and the Marian Vow

Our community has a Fourth Vow, the Marian Vow of Unlimited Consecration to the Immaculate, in addition to the three evangelical counsels of poverty, chastity and obedience.

The Marian Vow is the means to the maximum sanctification of oneself and the maximum salvation of souls, both to be achieved through the mediation of the Immaculate Queen and Mother of Mercy, with Her and in Her. The secret of the extraordinary value of this vow lies in reaching in the “swiftest, surest and most beautiful way” perfect imitation of Christ and the salvation and sanctification of so many souls, according to St. Maximilian Mary Kolbe.

Speaking about the Mother of Mercy, Pope Francis, in Misericordiae Vultus, No. 24 says: 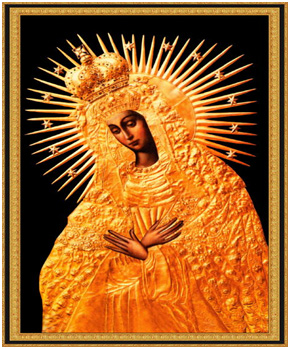 “My thoughts now turn to the Mother of Mercy. May the sweetness of her countenance watch over us in this Holy Year, so that all of us may rediscover the joy of God’s tenderness. No one has penetrated the profound mystery of the Incarnation like Mary. Her entire life was patterned after the presence of mercy made flesh. The Mother of the Crucified and Risen One has entered the sanctuary of divine mercy because she participated intimately in the mystery of His love… She treasured divine mercy in her heart in perfect harmony with her Son Jesus… Mary attests that the mercy of the Son of God knows no bounds and extends to everyone, without exception.”

The four Protector Saints of our community include the following: 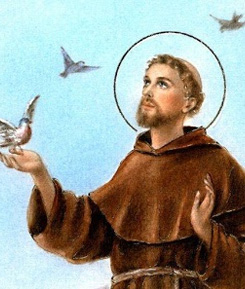 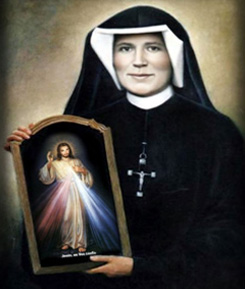 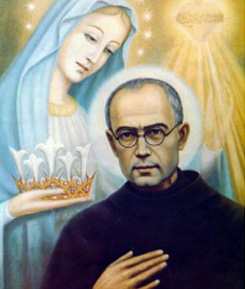 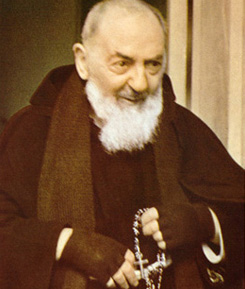