Franciscans of the Divine Mercy > Vocations

WHAT IS A VOCATION?

To speak about “vocation” is to speak about God. It is no longer a question of, “What do I want?” but rather, “What does God want me to be?” A vocation is not something that you can switch like a career.

It also important to distinguish between the universal call to holiness and the call to a specific vocation.

The universal call to holiness is rooted in our Christian baptism. It is a call to know, love and serve God. It draws us toward a deeper union with God. There is a growing desire in us to love God and to love other people. We come to understand that there is a reason for our life and there is meaning in it.

We live out the call to holiness differently depending on which specific vocation we are called. The four specific vocations include: single life, married life, consecrated life and the ordained ministry. Each vocation is a call to closely follow Christ.

The literal meaning of the word is “a call.” It is a call from God. The first and most important call from God is the universal call to holiness.

The married Christians follow Christ by giving themselves to each other completely, promising to love each other faithfully, sharing their joys and sorrows in whatever circumstances life may bring them. They express their love through a kind of union which brings them together in the closest intimacy and opens them to the gift of children.

For those who are called to the consecrated life, their manner of following Christ is through their vows of poverty, chastity and obedience. They are called to follow the life of Christ who is poor, chaste, and obedient. They make their hearts more free for prayer and the apostolate.

For those who are called to the ordained ministry, through the Sacrament of Ordination, they share in the priesthood of Christ in a special way. They are transfigured so that they can represent Christ the Good Shepherd and Christ the Head of the Church. They not only offer their own lives to the Father, as all Christians do, but they also stand before the Church and minister to the faithful as Christ “in person.”

VOCATION TO THE FRANCISCANS OF THE DIVINE MERCY

The call to become a Franciscan Friar or Sister of the Divine Mercy belongs to the specific vocation to the consecrated or religious life. 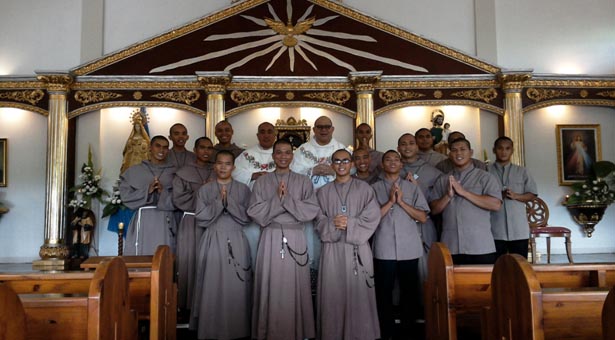 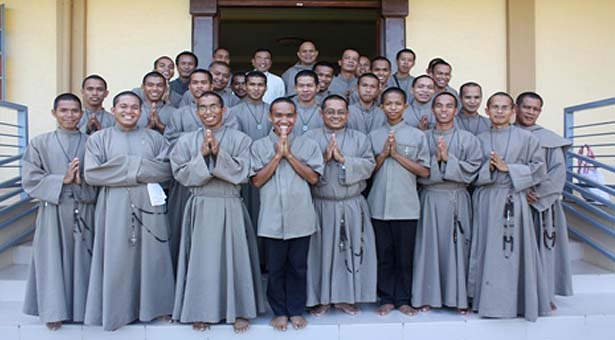 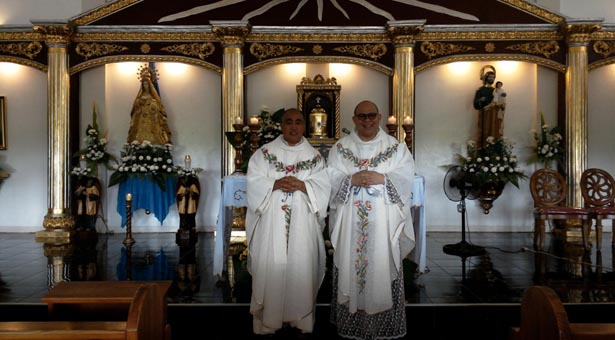 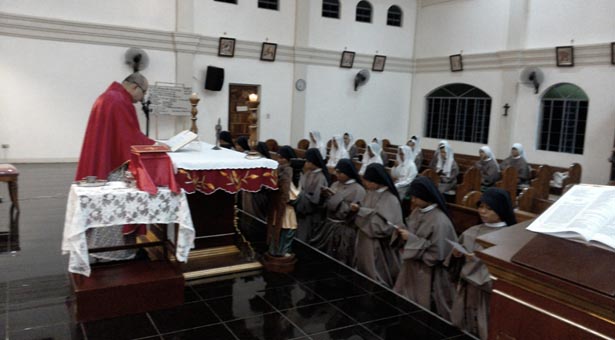 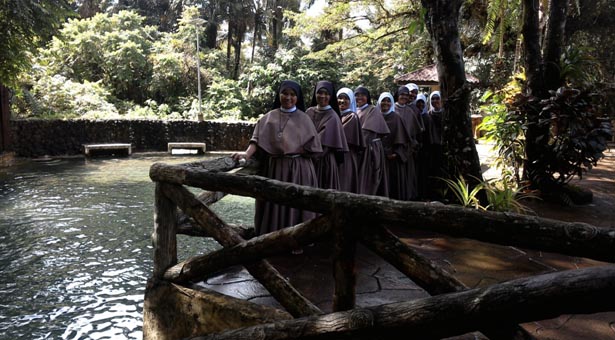 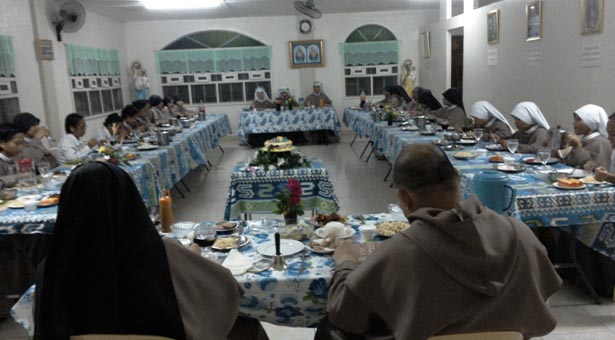 The postulancy is divided into two periods. The first period is called the aspirancy. The second is the postulancy proper.

The aspirancy may last a few months, or be extended to more than a year, according to the person’s maturity as evaluated especially by the spiritual director.

It is not necessary that the aspirant brings a complete wardrobe to enter the community. Let him/her bring what he/she can and what is appropriate for a life of poverty and love. The community will see to it that he/she does not lack the necessities.

Ordinarily young men/women between 15 and 35 years of age may be accepted. Exceptions should be carefully evaluated case by case.

For formation, observance of the prescribed stages is recommended so that the candidate is gradually inserted into the life of the community. Basically the aspirant should:

Documents required for admission to postulancy:

The aspirant becomes postulant with the “little clothing,” according to a rite proper to the Institute, preceded by a day of recollection.

The postulant wears the tunic of the Institute with sandals and bare feet, and with an ordinary veil for the Sisters.

The postulancy is always made within a house of formation, and ordinarily lasts a year, but may be shortened (or lengthened) in accord with:

If the young man/woman is well prepared, then his/her investiture as a religious may be anticipated.

The program of studies for the postulants is more intense, consisting on the average of two lessons each week treating the basic elements of Franciscan and Kolbean spirituality, catechism, Mariology, the liturgy and the Diary of St. Faustina.

For the life of prayer the postulant shall participate in the prayer of Lauds, Vespers and the Holy Hour of the community, common meditation, and have some time for personal prayer.

During religious services the postulant (and aspirant) shall faithfully follow the celebrations and actively participate in the liturgical rite.

The postulant shall engage in work and study everyday. Should he/she have programs of study to complete (for a diploma, doctorate, exams, specialization, music, art, various technologies, etc.), he/she should be helped to complete these, but in such wise that his/her preparation for the novitiate is not harmed. All this will serve “Mary’s Mission of Mercy” and so forms part of the preparation for the apostolate. But it is necessary to teach the postulant to supernaturalize that study in view of “Mary’s Mission of Mercy” which does not exclude any field of research and specialization.

Other types of work, within and outside the house—over and above domestic tasks—can be engaged in by the postulant with due discretion. For example: assist the cause of good literature, working at a computer, in the book-center, in the editing of a bulletin or periodical, work in radio-television studios, prepare a chorale, organize and conduct missionary and vocational exhibits, direct Marian Tertiaries and Association groups, guide retreats and vocational days, etc.

The witness of consecrated life of the community must constitute the natural, genuine environment in which the postulant can become ever more aware of his/her call by God to the evangelical life to live as a Franciscan Friar/Sister of the Divine Mercy, in the school of St. Francis of Assisi, of St. Maximilian Mary Kolbe and St. Faustina Kowalska.

The example of joyous fidelity to their own vocation on the part of the Friars/Sisters is the truest school most fruitful of graces to offer young men/women who want to make a total gift of themselves to the Lord. May this be the fundamental commitment of all our communities and especially the communities of formation.

The novitiate is the year most precious for religious life. It is the year during which the seed of a vocation sinks its roots, so that it may blossom and become a healthy fruit-bearing plant. If the roots are good, the plant, too, with its fruit will be good. But if the roots are not good, everything will, sooner or later, be put in jeopardy.

The hearts of those in charge must be filled with diligent and watchful care, that the novice be formed in the school of St. Maximilian Mary Kolbe according to the “pattern of Minors,” who is St. Francis of Assisi, and in the divine mold, which is the Immaculate, the All-Holy.

Admission into the novitiate is effected according to the norms set down according to the rite established by the Church. This rite, however, may be enriched, for the sake of devotion, by the traditional rite of investiture, when this is useful for the vocation apostolate.

The Father/Mother General or his/her delegate presides at the rite of investiture.

At the investiture the candidate’s name can be changed, at the discretion of the Master/Mistress of Novices, who will take into account the postulant’s preference.

To increase one’s commitment to sanctification with an even more radical detachment, a new and sacred surname, agreed upon by the Mistress of Novices and the postulant, is taken at investiture. The new surname, however, is not to be used in official documents and acts.

The program of study during the year of novitiate concentrates chiefly on the Rule and Constitutions, complemented by courses in Holy Scripture, Mariology, Franciscan and Kolbean spirituality, Franciscan history, liturgy and sacred chant, with additional courses at the discretion of those responsible, in accord with possibilities, attentive always to the documents of the Magisterium.

In making temporary religious profession, the following norms are to be observed:

THE FORMATION OF TEMPORARILY PROFESSED

The years of temporary profession are the period of interior development for every Friar/Sister in living his/her consecration to God always more fully and more deeply, looking to the Immaculate and imitating Her so that he/she may live an evangelical life pure, holy and immaculate.

The formation of the temporarily professed must be fundamentally directed to the growth of their spiritual life, to their doctrinal preparation, and the conduct of the work (inside or outside, pastoral or technical) in which they are to engage.

Let the temporarily professed be provided the means to continue their religious formation, namely:

For the students temporarily professed, there is a year of apprenticeship, in order to engage in:

For special cases the year of apprenticeship will be determined at the discretion of the Father/Mother General.

After a careful evaluation, the Master/Mistress of the professed should indicate what programs of study and specialization, or which trial courses each professed Friar/Sister should undertake (this might include study at Pontifical Faculties, Universities, Music Conservatories, Art Academies, various other institutions, etc.). The selection should take into account diverse talents, so as to work together in every way and in all fields for the “Mission of Mercy.”

At the same time the Friars/Sisters are often to be reminded of their primary duty to strive to “have what they must desire above all else, namely, the Spirit of the Lord and His holy operation, to pray always with a pure heart,” as the Seraphic Father declares.

Thus, in assessing programs of specialized study it is better to select Friars/Sisters with talent and aptitude for a given field, and give preference to religious studies, especially in the fields of Mariology and Franciscanism, spirituality and catechetics. The study of music should be cultivated, primarily to contribute to the dignity of the liturgy, and the study of science and technology of the mass media in view of catechetical instruction and evangelization.

Ordinarily (except for reasons to the contrary) all Friars/Sisters should obtain a driver’s license and learn to use a computer to the degree possible. If possible, this should be accomplished during the postulancy.

In every case, care should be taken that all Friars/Sisters assigned to study and to specialization always be motivated by an intense supernatural spirit so as to prepare for a service of charity (and not of prestige or power) to their confreres and to all souls to save and sanctify. If this supernatural spirit of charity and humility were lacking, the Apostle’s fearful words would come true: “Knowledge puffs up” (I Cor. 8:1).

For perpetual Profession the norms of Chapter 2, Article 16 of the Constitutions and what follows are to be observed:

For a permanent formation program after perpetual profession, in addition to what has been said above for the temporarily professed are to following: